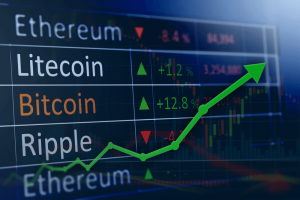 Bitcoin [BTC] and the crypto market recorded positive gains on Monday. The momentum continues at the break of a new day (UTC time) as well. Bitcoin [BTC] logs high at $8344, while XRP, EOS, and TRON lead altcoin gains. Currently, the dominance of BTC over the market is 66.5%.

XRP led the crypto market into gains yesterday followed by a rise in BTC. However, at $0.28, XRP is still trading 20% lower from its’ yearly opening. Hence, it is not wrong to say that altcoins are still in the bear market. Nevertheless, a ray of hope appeared this weekend, as it gained slightly over Bitcoin.

While altcoins look primed for further gains w.r.t. to BTC, it is still “still deep in the muck.” Mati Greenspan, the Senior Market Analyst at eToro noted in his daily market update that altcoins are still ‘heavily correlated’ with Bitcoin. For an alt-season, a retracement of some of these losses is necessary.

Hypothetically speaking, if we do continue to see bitcoin trailing the rest of the cryptos, and if indeed we see a retracement of some of these losses, we could have a nice case for a new altseason.

Nevertheless, as far as correlation goes Bitcoin is still trading below key resistance levels. Furthermore, TA analysis estimates further downside, before a revival can be seen. Crypto-trader, Josh Rager explained the market sentiments in his tweet,

The only issue, as simple a concept as it is, Bitcoin has continued to make lower-highs on the trend Failure to break the previous swing high will just be another lower-high

Hence, traders still seem to be waiting for a better buying opportunity in Bitcoin. However, the price can vary depending on a lot of factors, alt-season being one.