“This analysis is an adaptation from the work of Mati Greenspan, Senior Market Analyst at eToro

One of the biggest innovations of bitcoin is the invention of a blockchain that allows us to transfer something of value across the internet, without the possibility of being duplicated and without the need of a trusted third party to verify the transaction. Though the practical applications for this are virtually unlimited, one of the most obvious is the ability to revolutionize the financial markets. At the moment, just about all global markets rely on a central authority. The ability to create a digital token that represents a financial asset is just around the corner.

In fact, DX has just announced that they will be the first to deliver tokenized stocks starting next week.

As a regulated broker, DX plans to hold onto the shares and issue the tokens. The tokens can then be traded freely and cheaply by anyone in the world 24/7. This is only the beginning though of how cryptos could change the financial world. Over the next decade, there is a possibility of the entire financial markets getting tokenized. DX’s this move clearly concludes that anything that has value and can be traded can also be represented as a digital token and traded on a blockchain.

Is Crypto a safer bet than traditional markets?

Its been a turbulent start to a traditional market in 2019 and it seems like a fitting time to check how crypto is lining up with traditional assets. Putting together Bitcoin (in black) against traditional assets such as S&P500 stock index (in blue), the USD (in green), and Gold (in orange) the trend is pretty clear.

The chart presented below provides bitcoin’s correlation to the USD (Blue), the US stock market (grey), and gold (purple). 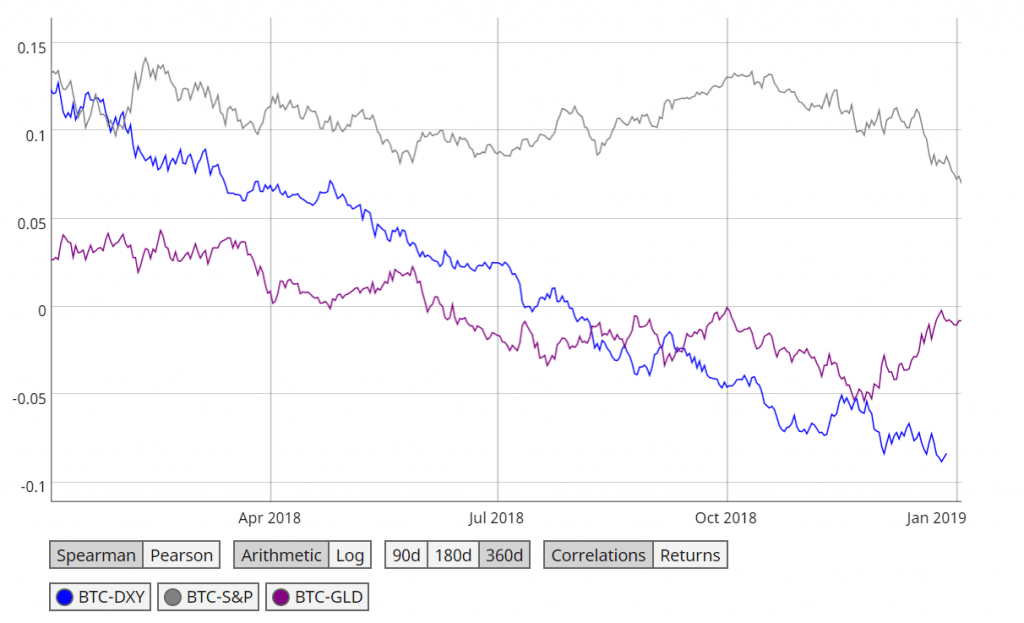 The numbers here are very small. A high of 0.15 and a low of negative 0.1 shows that there’s virtually no correlation.

The charts clearly show how the correlation between bitcoin and gold (purple line) has risen sharply over the last month as both gold and bitcoin rise together.

But that’s not been the case with stocks as they continue to decline. With Bitcoin rising and stock plummeting, in future, there could be a time when Bitcoin might be seen by some as a safe hedge against stock declines, but it’s still far away from that.